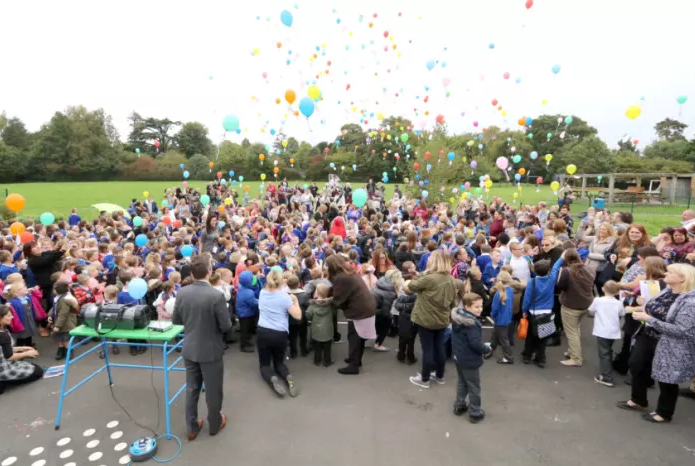 The festivities, which took place across the week, concluded as every child at the Leigh Park school released a coloured balloon – containing a personal wish for the world over the next 60 years. Each handwritten message was accompanied by a name and telephone number, enabling its finder to get in touch with the school once each balloon – of the 500 sent into the sky – has eventually descended.

Year 6 pupil, 10-year-old Coral Whitaker, said: ‘This week has been really fun. In my balloon I wished that every child would have the same rights, no matter what they look like or where they’re from.’ Alfie Hunt, eight, who is in Year 4 said: ‘I wished there was peace in the world so there are no wars.’ While Year 6 pupil Jorja Wright, 11, said: ‘My wish was that every child across the world could have an education. Learning is so important – everyone needs to get a job and a house on day.’ Earlier in the week, pupils were challenged to branch out and perform 60 acts of kindness for members of their local community.

These gestures of goodwill varied – as youngsters posted biscuits through the letterboxes of their neighbours’ homes, left flowers on local benches for passersby to take and visited residential homes in the area. The aim of the scheme, said executive headteacher James Munt, was to give back to local people – who have collectively supported the academy over the years. He said: ‘The children have been really on board with the activities. In getting involved, they have taken the time to learn a little bit more about the background of the area they live in. ‘But what’s more than that, they have loved doing things for other people. ‘It has been really nice celebrating our big day – the school has come so far.’

Unfortunately not the ones with chocolate chips.

Some cookies are necessary in order to make this website function correctly. These are set by default and whilst you can block or delete them by changing your browser settings, some functionality such as being able to log in to the website will not work if you do this. The necessary cookies set on this website are as follows:

Cookies that are not necessary to make the website work, but which enable additional functionality, can also be set. By default these cookies are disabled, but you can choose to enable them below: